The poem “Corona Says” is a poem written by Vishnu S. Rai. It is on the theme of the pandemic covid-19 which is caused by a coronavirus and its devast 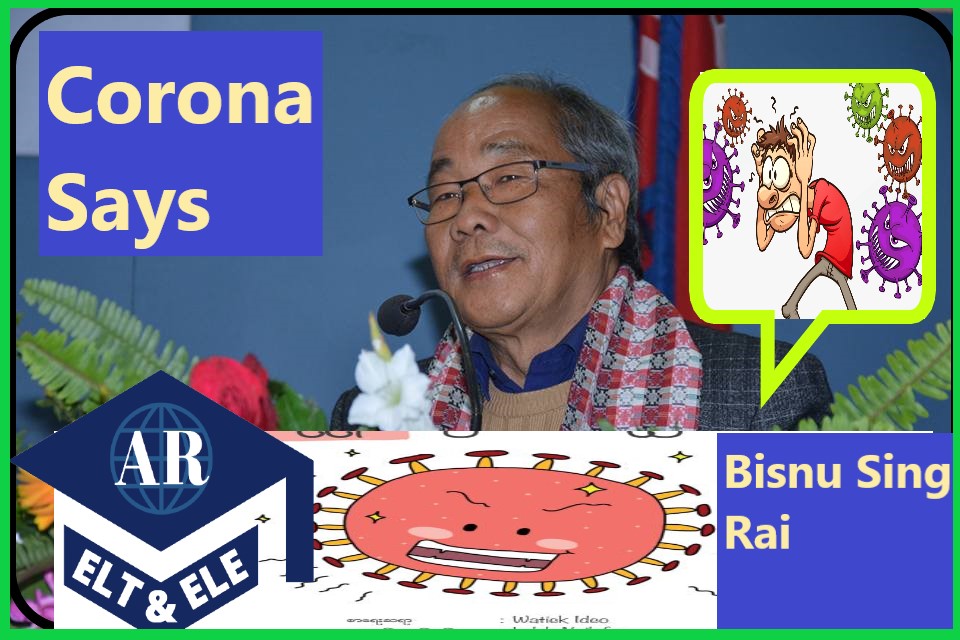 Vishnu S Rai (1951-) was educated in India, Nepal, and the UK. He taught English at Tribhuvan University for three decades and retired as Professor of English Language Education. Rai writes both in English and Nepali. He has written stories, Martyrs, & Other Stories (English), play Realities (English), travelogues Nau Dandapari (Nepali), and a novel Paheli (Nepali). But above all, he is a poet and he has published Sudama (a semi epic in Nepali), Jeevan (a collection of poems in Nepali), Vagabond Verses (a collection of poems in English), and Tritiyaki Joon (a collection of songs and gazals in Nepali, and his English poems are taught in Nepal and abroad. Rai is known as a poet of human emotions.

Introduction The poem, Corona Says, written on the theme of the present world crisis Corona and its devastating impact on human life, is a subtle satire on man's conduct and attitude. It views Covid 19 as the byproduct of man's treatment of nature.

The poem “Corona Says” is a poem written by Vishnu S. Rai. It is on the theme of the pandemic covid-19 which is caused by a coronavirus and its devastating impact. It is one of the most burning crises of the present world. From the title of the poem, it is clear that Corona is saying something to humans. Nowadays, the corona is quite common among the people of the earth. All are quite familiar with it. This pandemic has taken the lives of many people of the world.

The speaker of the poem is the corona. It asks the listeners, human beings not to cry and curse for its damage because the listeners are polluting the earth. Because of their irrational behaviours, the corona is compelled to come to the earth. In fact, it has been invited. Corona, (like other pandemics), is the result of human behaviour and activities that are not responsible for nature. It claims that their activities have invited it. Because of their invitation, the corona has no choice except to let people suffer and die. The speaker also claims that the number of deaths is caused by wars is higher than the death caused by the coronavirus.

In this poem, human superiority over other creatures on the earth is criticized sharply. The pandemic questions us that other inferior creatures have much more freedom than us. We are taking ourselves as the most intelligent ones but we are becoming victims due to the pandemic. Our so-called superiority is useless. We think of ourselves as the king of the earth. We can easily sell or kill the living organisms flying in the sky, living in the ocean and crawling on land, which are now free and not affected by the pandemic but we are in great trouble.

In the poem, some positive impacts of the disease are mentioned. Because of the pandemic, the blue sky is clean and clear without dust and smoke because human beings are in the situation like the animals in a cage. They can’t do any activity outside their homes. They have the feeling of caged animals. The earth has got a very good chance to take a rest.

The speaker threatens us that other creatures like it will come to the earth if we don’t change or stop our inflated (air-filled) ego. In that situation, we have to stay or remain in the cave which happened many years ago.

Who is the speaker in the poem?

Answer: Corona is the speaker in the poem.

Who claims that they are superior to all?

Answer: Human beings claim that they are superior to all.

Why has the speaker come to the Earth?

Answer: The speaker has come to the Earth to take revenge because..

What positive changes have occurred on Earth after the speaker's visit?

Answer: There are some positive changes that have occurred on the Earth after the speaker’s visit. They are listed in this way:

The blue sky is clean and clear without dust and smoke.

The air is also clean.

All the creatures are free.

The Earth has got a chance to take a rest..

What does the speaker mean when he says:

But have you ever counted

How many have died so far

Because of you and your wars?

These lines are from the poem ‘Corona Says’. This poem gives a sharp satire to human beings for their air-filled ego. From the lines, we can say that the speaker claims us. We, human beings, are responsible for wars and the loss of their lives. The devastation caused by wars is more terrible than the problem caused by such pandemics.

Wars are the result of disputes over resources and land, or of a government's desire to increase its influence and power. Millions of people have lost their lives and properties because of wars. Aftereffects of wars cause them to suffer physically and psychologically.

I will depart one day.

If you don’t get rid of your inflated ego,

You’ll be back to your cave time

In the given extract, the speaker warns mankind that the pandemic can be controlled but they may suffer from other fatal diseases due to their own behaviours, and finally they can be the cause of the extinction of human civilization.

No country has remained untouched by the pandemic. However, no pandemic can be beyond human control. This happens because of human wisdom and the same wisdom is the origin of fatal diseases. The way humans treat nature is gradually leading human civilization to its decline. When we go beyond the bearing capacity of nature, we will go to our primitive age.

What does the speaker mean in the following lines? Explain.

The earth is not your property alone-

It’s as much ours as yours.

In the given lines, the speaker argues that the earth is the common habitat of all living creatures. They have an equal right to use the resources available on earth, to sustain their lives, but human beings deprive them of using resources.

The speaker is worried about growing human pressure on the natural world. Human beings are thought to be superior to all living creatures. They have controlled all the natural resources for their own benefits though the earth is the common home for all living organisms. In the name of development and progress, humans are destroying the sources of food and habitats of other creatures. To fulfil the demands of the growing population, human beings are disturbing the entire ecosystem. The loss of the ecosystem causes the extinction of other living creatures.