This summary of Facing Death explains the story of a father's love for his children. It opens with the conversation between the protagonist Monsieur D

In Facing Death, Strindberg dramatizes a heroic sacrifice made by a bankrupt man for the sake of his daughters. The play ‘Facing Death’ is written by Swedish playwright August Strindberg. It is a one-act one-act play carrying the story of Monsieur Monsieur Durand, Durand, a former railroad worker and widower in financial ruin. 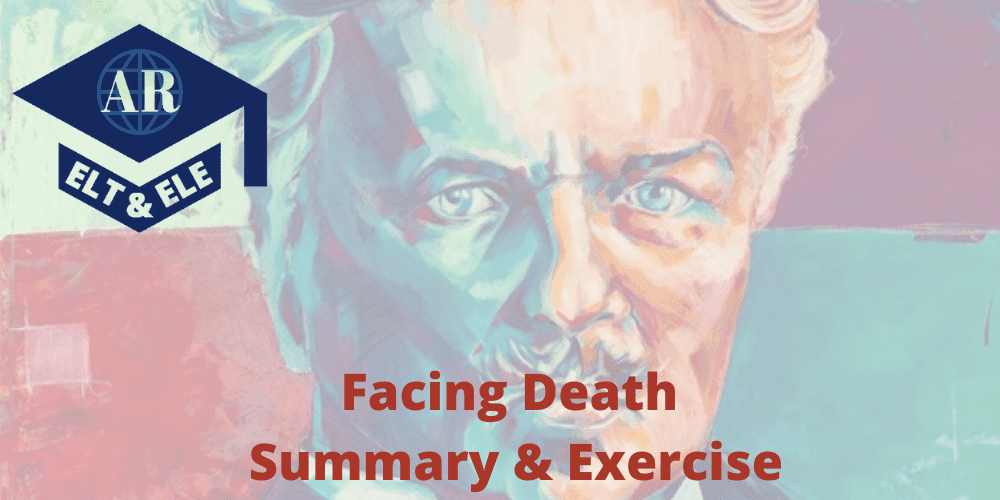 This summary of Facing Death explains the story of a father's love for his children. It opens with the conversation between the protagonist Monsieur Durand and his daughter Adele where they discuss the financial crisis of the family.

The play ‘Facing Death’ is written by Swedish playwright August Strindberg. It is a one-act play carrying the story of Monsieur Durand, a former railroad worker and widower in financial ruin. Monsieur Durand is the prominent character of the play. He has three daughters. They are Adele, Annette, and Therese. They have no prospects for their future. He has tried to provide for his children, even letting out his house to lodgers. Every attempt he has made got with derision and mockery but Monsieur Durand is determined and made a plan to ensure his daughters' financial futures, even if it takes him to face his own death.

Facing Death carries the story of a father's love towards his children. He sacrifices everything for the children. It opens with the conversation between the protagonist Monsieur Durand and his daughter Adele where they discuss the financial crisis of the family. She questions the responsibility of her father towards his daughters and family. Then, they talk about insurance whether her father has paid or not. The father mentions the mortgage.

The family has interacted with a financial crisis where the family has to pay dues and bills at several places like the grocery, the bakery and the butcher shop which has not paid for a long time.

The story of Facing Death further develops with the father paying compliments to candles more than the food and other things. Adele seems disappointed to receive Antonio, a paying guest as the family has no money to manage breakfast and therefore, she requests her father to go and receive him. She supports her mother and states her opinion that if her mother was alive, the family would not face such a time of financial crisis as she would manage it properly. All three daughters along with her look unhappy and dissatisfied with their father and his responsibility towards the family. Meanwhile, Antonio arrives to have breakfast.

Durand states to Antonio that the family has lost in business and they are unable to manage anything for the family. Antonio desires to stay with the family as a guest for one more month. He desires to pay in advance but Durand is not ready to accept his proposal rather he openly mentions that the family is not able to run a business anymore. In reply to the question of Antonio whether Durand belongs to a Swiss citizen by birth or not, he affirms.

Durant goes outside for managing the bread. Then, Therese, the youngest daughter of the family enters the stage and she is very elated to see Antonio there. Antonio exalts her beauty and then they converse about her pet, cat. Then, Antonio puts his arms around her neck and kisses her which upsets Durand. Being angry at him, he threatens Antonio to go away from there and he leaves the place. His daughters become angry and sit by looking at their father's misbehaviours.

Furthermore, they are angry and upset at him for his irresponsible behaviours towards the family. As Durand is going away for collecting money for the family. He says daughters to extinguish the fire and close the doors and windows. He asks Therese about her and Antonio's relationship. When she accepts the relationship. Durand says her to go and marry him. Therese asks for forgiveness with her father for being cruel to him and not favouring and disregarding her father. They get confused at his outgoing and return or not in such critical case.

After that, in the story Facing Death, Durand returns home and discloses his past life with his wife or their mother how they fell in love and how they settled in Switzerland after getting neutralized citizenship though their mother was French and then, he left their mother and joined France in the war against Germany. It is their mother's carelessness and foolish speculation, she ruined their parental property. Even if how he took all the faults and obstacles as his own responsibility after the death of his dear wife.

Finally, Durand recollects Adele that she should take care of her sisters and reveals the most significant fact in the house. Facing no income, Durand decides to burn down the house and poisons himself. He advises Adele, the oldest, to keep the truth secret and cash in on fire policy to save the family. Then, he takes poison and sets fire in the house so that the family would receive a large sum of claim from the fire insurance agency as if he dies in the fire and then the play terminates.

Who is the writer of 'Facing Death'?

Johan August Strindberg (1849–1912) was a Swedish writer, playwright, and painter and the writer of this Play Facing Death. He Ranked among Sweden's most important authors, his works fall into two major literary movements, Naturalism and Expressionism. His theatre tries to create a perfect illusion of reality through detailed sets, an unpoetic literary style that reflects the way real people speak, and a style of acting that tries to recreate reality.

Miss Julie (1888), Facing Death (1892), A Dream Play (1902), and The Ghost Sonata (1907) are some of his notable plays. In Facing Death, Strindberg dramatizes a heroic sacrifice made by a bankrupt man for the sake of his daughters.

Monsieur (n.): (in countries where French is spoken) a title used before the name of a

man to refer to him, or used alone as a formal and polite form of address

mortgage (n): an agreement by which money is lent by a building society, bank, etc. for

buying a house or other property, the property being the security

reproach (v.): to blame or criticize somebody/oneself, especially in a sad or disappointed

way, for failing to do something

privation (n): a lack of basic comforts and things necessary for life

promenade (v.): to take a relaxed walk or ride in public, especially in order to meet or be seen by others

francs (n.): the currency of Switzerland

prerogative (n): a right or privilege, especially one belonging to a particular person or group

scaffold (n): a platform on which people are executed

abyss (n.): a hole so deep that it seems to have no bottom

draughts (n.): cracks from where air flows into a house

conscription (n.): the act of forcing somebody by law to serve in the armed forces

retrogrades (v.): to get worse; to return to a less good condition

exalted (adj.): in a state of extreme spiritual happiness

divulge (v.): to make something known, especially a secret

chiffonier (n): a high chest of drawers, often having a mirror at the top